The passionate enter politics to make their ideals of a better nation reality. They enter to serve. Some suffer imprisonment, personal injury or even death in pursuit of their beliefs. They pay the highest price of all.

Things are better in the BN. High prices also have to be paid, but these are merely in ringgit terms. Chow Kum Hor, aide to Transport Minister Datuk Seri Ong Tee Keat, wrote in the New Sunday Times on 16 August that he “… spent a fortune changing my wardrobe and even stopped going to the neighbourhood barber” as he does not want to “… make the boss look bad.”

I guess we shouldn’t be surprised at Chow’s sartorial upgrading. When your boss flies private jets (business class is not good enough?), and your coalition counterparts swan around in handsomely-tailored Italian suits and luxurious Swiss watches one could be forgiven for feeling a little bit insecure.

That’s the BN for you. A preoccupation with style over substance. It doesn’t matter that 400,000 households – about 2 million Malaysians - still live in poverty. Our government must look good!

It also betrays a lack of true self-confidence. What’s important is your ideas and character. Gandhi lead India to independence in a dhoti. Fine, Gandhi is perhaps too ideal an example for our politicians to aspire to. President Barack Obama, leader of the most powerful nation in the world, wears US$1,500 suits which can be bought in department stores. And here at home, DAP leaders look just fine in their regular outfits.

I agree, clothes make the man and first impressions are important. I wouldn’t want our leaders presenting themselves in rags and tatters. But there is no need to spend a small fortune to look good. Consider the picture below, from Malaysiakini. 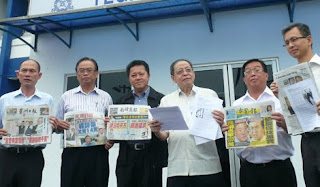 The DAP elected representatives look smart enough to me. By the way, Tony Pua (far right) didn’t change his wardrobe when he was elected as MP for PJ Utara. In fact, he downgraded. Following a price hike at the Lake Club barber, he now patronises the neighbourhood barber just downstairs of his service centre. And as far as I can remember, Kit Siang and the rest have dressed the same.

Great leaders are often described as having great vision, passion and character. A snappy wardrobe is rarely mentioned.

I’m not saying the DAP leaders carry all the positive qualities. But at least they live and dress like most Malaysians.

The BN in contrast, considers the neighbourhood barber low-class. It’s good enough for millions of Malaysians but not enough for them. If they’re so divorced from the average Malaysian, can they really lead us to a better future?
Posted by Chi-Chang at 8:06 AM

Labels: Me and my interests, Public Interest

As far as I'm concerned, US$1500 suits of Obama's are mightily expensive. To most of the US population $1500 is a large lumpsum. What is it, only a measly sum of RM 5130 ??? Frankly, that's the cost of what those MCA goons spent on their suits.

The wise among us look for substance, substance..with the BN, it's all hot air, flash and splash, little else.