The media shapes our beliefs and prejudices. It can be for the better, or for the worse, insidiously.

I was clearing a pile of old newspapers when I came across a few covering the time in February 2009 when wheel-chair bound Member of Parliament Karpal Singh was confronted by a group of UMNO Youth members.

Under a caption “Face of Fury”, the Star front-paged a picture of MP Gobind Singh shielding the disabled Karpal Singh from the strapping young men seeking to confront him. The New Straits Times said “Parliament Violated”. 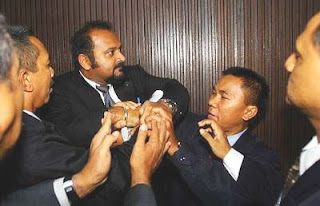 Both headlines and the picture (from the Star) skirted the core issue: A mob of young men confronting a disabled MP twice their age could have been construed as an attempt at intimidation. Yes, they had their grievances. But couldn’t they have appointed one representative to present a memo to Karpal? Surely they didn’t need to feel safety in numbers?

Our government says the media has an undue influence on the young. So we have bans and restrictions on depicting Mat Rempit, effeminate men, long-haired males ….. In the same vein, the government and civic elders should display intolerance of boorish behaviour. Downplaying such antics foments a society where civil, reasoned debate is foregone in favour of might is right.

Media influence also extends to politics, of course. Here are headlines which could have been:

“Terengganu UMNO out of control” – remember the Mercs, the disagreement over who should be Menteri Besar and the on-going issues?

This is something easily addressed. If you agree the mainstream media has become unduly one-sided, stop consuming it. Don't buy the daily newspaper and watch less tv. Read independent news and good books instead.
Posted by Chi-Chang at 9:07 AM

Hi..i'm just a regular blogger, bumped into this web because i typed politics in google and it brought me into this site, and like most Malaysians who rely on the internet and other sources for political news too, I'm starting to feel angry with the media and the GUV, for all the cover ups, No..wait...i think I'm starting to feel angry with GUV. I'm 24 this year, and i'm working my arse off everyday just to earn chicken feed, cant you guyz up there do something to help us instead of politicking?